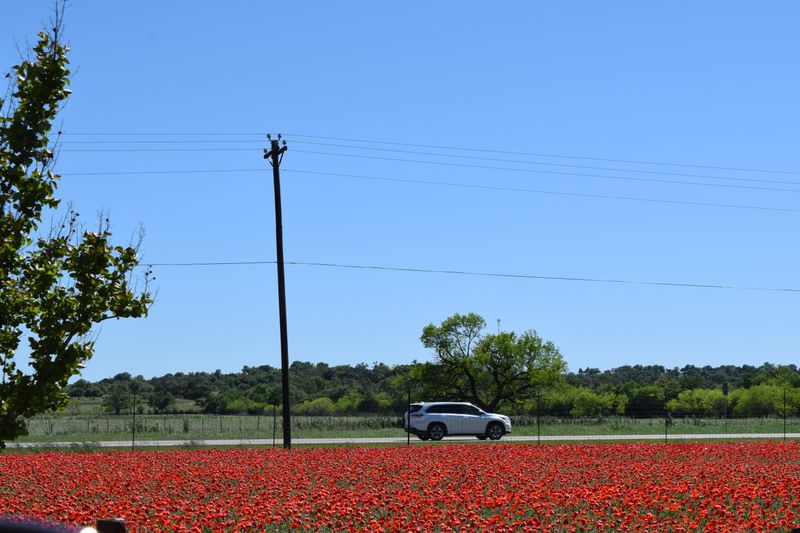 On Sunday, April 15, we left Fort Stockton for Fredericks, TX. Following I 10 we continued through the desert like landscape. Slowly the foliage began to change from cactus and wildflowers to low-growing shrubs with occasional trees. The land began to roll, the trees got more significant by the time we reached the turnoff to US290 we were deep in the hills. Covered with live oaks and wildflowers the landscape was a refreshing change from the deserts of the past 5 months. As we drove along, we passed ostrich ranches, goatherds, and of course many many cows. It was a beautiful drive.
Our campground, a KOA only 5 miles east of town, was lovely, shaded by the long branches of the live oaks. Located four miles north of Luckenbach, we made that our destination for the first night. Luckenbach is (was) a little town that was purchased back in the 70s and became a music destination. It is still a collection of old buildings with a couple of stages for visiting and local performers. When we arrived a two-person group, Fort Defiance, was on stage. They sang their own works, a combination of folk and country. The audience sits at picnic tables, benches, rocks, whatever is available. When they finished the "picking circle" began. Performers in a circle of rocks perform for whoever is there. They were good, we enjoyed the entertainment and to good food available. We finally had to leave when Gracie caught sight of the roaming chickens. "Everyone is someone at Luckenbach, TX."
Fredericksburg has one long main street populated with buildings from an earlier era. Now they are filled with shops, but not the junky souvenirs in most tourist areas, but classy high-end jewelry, antiques, home decor, clothing and a multitude of restaurants. We used two days to walk the main street, browsing and eat along the way. Day one my favorites were a kitchenware store located in the old hospital and run by the original doctor’s granddaughter, a clothing store in the former White Elephant Saloon (the white elephant on the pediment over the door, a quilt store in an old department store and others. I had been looking for earrings to match a Navaho turquoise pendant I purchased at the Grand Canyon. We the assistance of Sal, a charming young man, I found a perfect pair at the Fredericksburg Jewelry, plus he recommended I put the pendant on a silver pearl chair to enhance it (and it did) and a lovely little turquoise ring. The Silver creek restaurant had a quaint beer garden, so we returned to the RV for Gracie. I forgot to mention Dogopolois, the best pet store ever, we took Gracie there for a new harness and hat, then to the restaurant for dinner. I had the Sauerbraten and Tom the something else, with sour kraut and mashed potatoes, both delicious. With full tummies, we returned to RV for the evening.
The second side of the street had an equally impressive array of stores and restaurants. We stopped in the Luckenbach store to check out their array of hats and shirts, I got a shirt, Tom a hat and window sticker. They have a delightful old 5 and 10 still furnished with the antique display cases and shelves. I don’t know how they found them, but some of the clothes even looked like they were leftover from the 50s. Several more jewelry stores, I found a cute little turquoise bracelet, restaurant, wine tasted shops, art galleries, the County Court House and the Public Library. For a late lunch early dinner we stopped in the German Bakery for delicious Ruben sandwiches.
Day three was reserved for the Nimitz Museum of the Pacific War. Admiral Chester Nimitz was a native of Fredericksburg where his family owned a hotel. He went to the Naval Academy in Annapolis graduating near the top of his class. Nimitz rose in the ranks until 1938 when FDR asked him to take command of the Pacific Fleet, declining so to not jump over other qualified men for the position. In 1941 when the Japanese attacked Pearl Harbor, he accepted the command. After Pearl Harbor, he took the job.
The displays were excellent. Each phase and battle of the war was explained in detail. Maps, digital displays, photos, and personal items were used. After 6 hours we were exhausted and hungry. This is a great museum, not to be missed if you are in the area.
Just down the road about 15 miles in Stonewall TX is the Lyndon Baines Johnson National and State Historical Park. We entered through the state monument. In the visitor center, a movie of Johnson’s life on his ranch was presented. His love of this land was so beautiful to see. There is a small museum filled with objects from his life and times and the history of the area. The Sauer-Beckman Living History Farm is also located here. We walked through the farm, visiting with the sheep and chickens, chatting with the residents, and observing how a farm family would have survived in this area in the early 1900s. No electric, cooking on a wood burning stove, milking their own cows for milk, butter and cheese. A fascinating place to visit. https://tpwd.texas.gov/state-parks/lyndon-b-johnson/park_history#farm 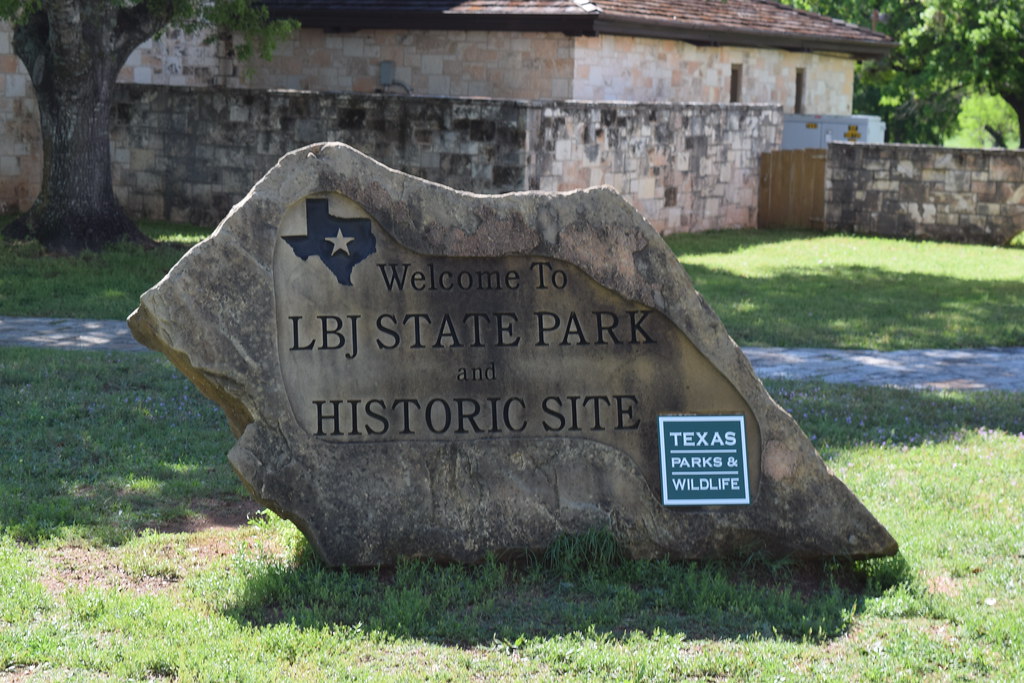 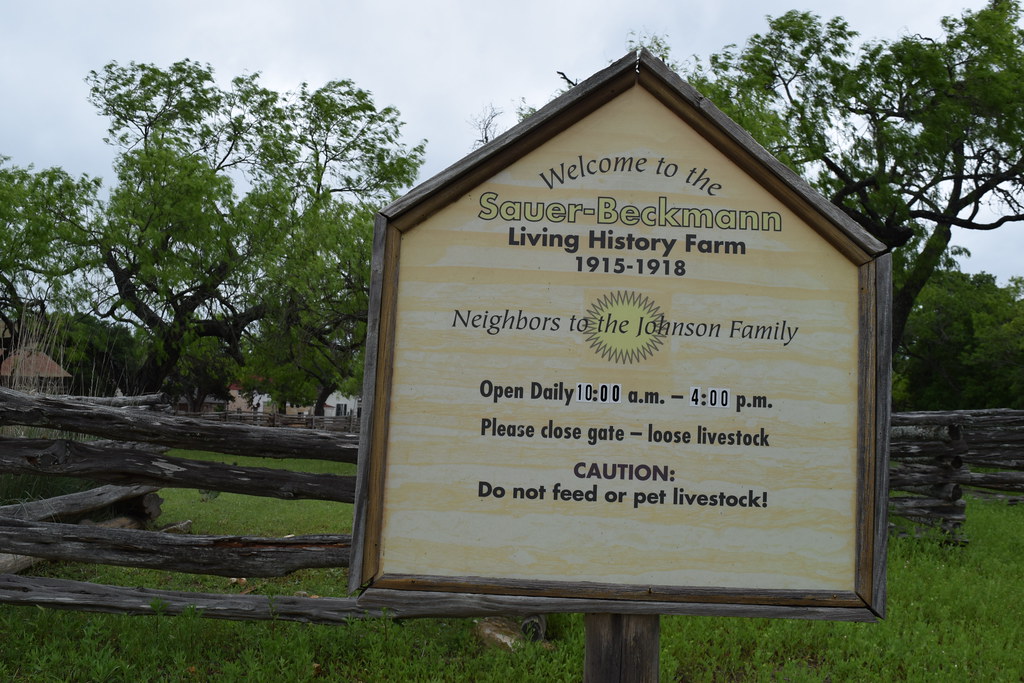 Leaving the State Park on Texas 1, we soon reached the National Park. At the entrance was the old schoolhouse Johnson attend beginning where he was only 4 years old. It was here that he signed the Elementary and Secondary Education Act on April 11, 1965, with his first teacher Miss Katie Deadrich at his side. https://www.nps.gov/lyjo/planyourvisit/junctionschool.htm
As the park road wove along the Pedernales River shaded by ancient live oaks, we passed the dogtrot home where he was born and the family cemetery where he and Lady Bird rest with his ancestors. Across the river is the Lutheran Church they attended. As the road turned out into the pasture land, a sign warned that cattle might be in the way. Beautiful Herefords, descendants of Johnson’s cattle, grazed in the fields and some on the verges of the road. The road wandered through the ranch ending at Johnson’s home. Sitting in a grove of Live Oaks facing the Pedernales River the home is a beautiful example of a Texas Ranch. We were unable to enter the house due to reconstruction work being done, but we did enjoy a tour of the property and a look at this car collection. The ranch property was given tot he National Park Service by President Johnson and his First Lady Claudia Lady Bird Johnson at her death. https://www.nps.gov/lyjo/index.htm 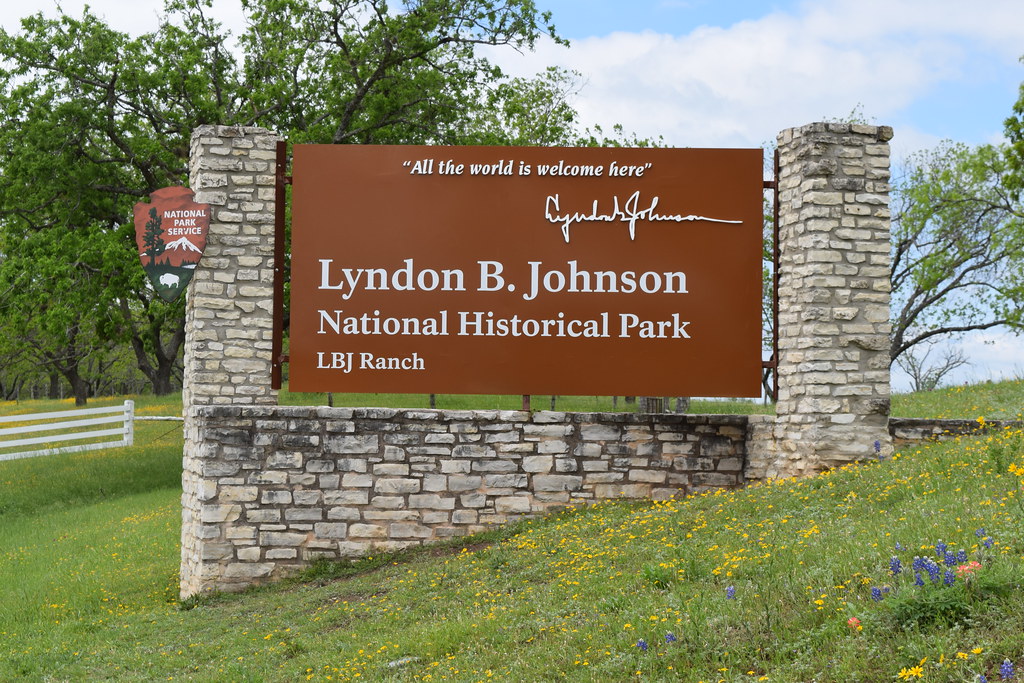 We really enjoyed our four days at Fredericksburg.

Field of poppies at wildflower farm.