Well, we are as Willy says, on the road again. You may think I’m Crazy, but it was ways on my mind to go this way. We left Palm Springs on April 3, first stop Gila Bend AZ. About 50 miles south of Gila Bend is the Organ Pipe Cactus National Monument. We stayed at possibly the most beautiful RV park ever, the Gila Bend KOA. All newly redesigned, long pull-throughs, nice restrooms, a dog park and bath, pool and rec hall. We stayed for two nights.
The Organ Pipe Cactus only grows in a small area just inside of the US on the border. This is the only place in the US with the proper climate for it to survive, although it is common in Mexico. The cactus received its name because early settlers thought the dead Stems looked like organ pipes. The drive down to the Monument was beautiful, the roadside was covered in yellow, blue and orange wildflowers and the fields with saguaro cactus. We stopped in the little town of Ajo, AZ for a bit to eat (coffee and ham and cheese sandwich) then back to the Rv. The monument was beautiful, the roads were gravel and rough, but we really enjoyed our day. 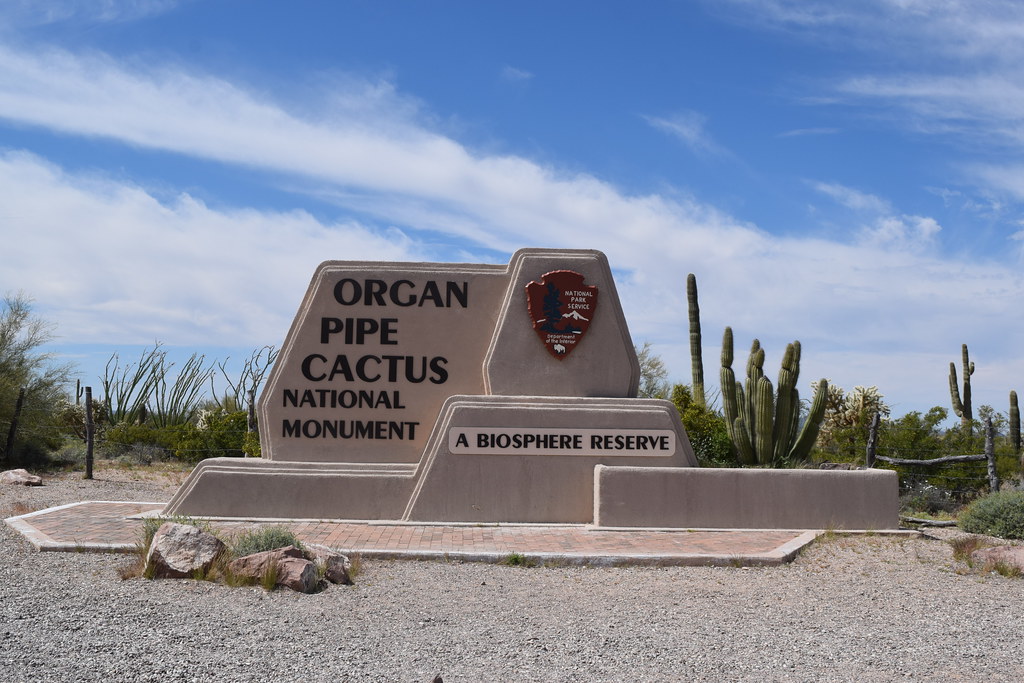 For dinner, we went to the Taste of Italy in Gila Bend. They have a big poster of Prince Harry in one of the booths. When training as a helicopter pilot in the Royal Air Force, Harry was station the Barry Goldwater Training Station nearby. He and his buddies came in for pizza. Harry said it was the best he had ever had, Tom said it tasted like Luigi’s in Akron, our watermark for the best pizza.
Famous pizza, a beautiful RV park, and a day at a unique national monument, it was a good stop.
On to Tucson, the drive was through miles and miles of desert putting on her best display. As in California, the desert floor was a riot of color with the super-bloom of wildflowers. The huge saguaros marched through the fields of flowers and blooming creosote shrubs. While it is not my favorite landscape, there was a real beauty to it.
Our RV park, one of the mega parks in the area, was the Rincon West. It had about a thousand sites, most were tiny homes from the 1980s, spaced close together along the streets, the RV section was long straight rows mostly empty now. The landscaping was beautiful, every activity you can imagine was available, free coffee all day, but for us, it was a nice place to stay for a few days not all winter. I was reprimanded the first day for walking Gracie in a no dog area. It was, however, cheap, only $20 a day with Passport America.
We wanted to visit the Saguaro National Park while here, so day one we set off for the Western section of the park. However, we must have set the GPS wrong because we ended up in the Eastern part. The loop through the park was several miles winding around the hills and valleys covered in a variety of cactus, wildflowers and rock formations. The sky was blue with a few clouds, absolutely beautiful. 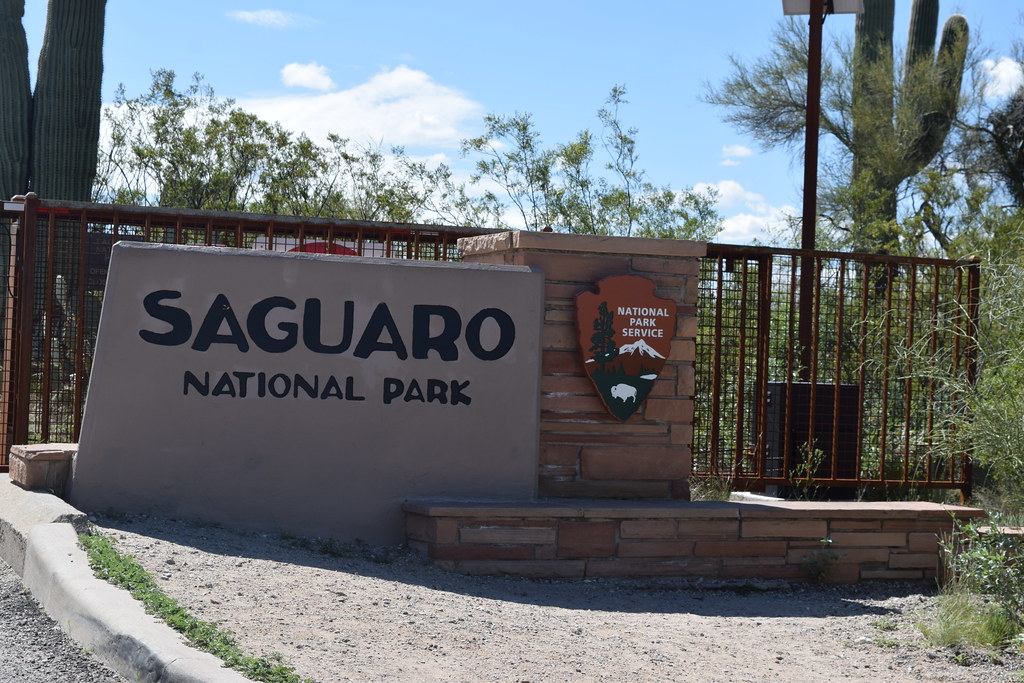 While at the park we met some Ohioans, "OH" "IO". We chatted for a while, they mention the Kartchner Caverns State Park, we had planned to skip it but after our talk, it became a must stop. Consulting the map, it realized it is on the way to Tombstone, "the town that would not die."
Early the next morning we set the GPS for the caverns. A resident of the RV park offered doggie daycare in exchange for a donation to the local pet rescue, so Gracie was OK for the day. Discovered in 1974 by 2 college students the caverns were one of the best we have visited. The state has taken meticulous care in developing the tours, to protect the environment and the bats. Cameras were not permitted in the caverns but here is a link for more information https://azstateparks.com/kartchner and another for pictures. https://www.google.com/search?rls=en&q=kartchner+caverns+pictures&tbm=isch&source=univ&client=safari&sa=X&ved=2ahUKEwjslv-m5NThAhVHY6wKHdzmDBQQsAR6BAgGEAE&biw=1440&bih=812
After a few hours at the caverns, we continued south to Tombstone AZ. Tombstone is probably the most famous of the "Wild West" towns, the site of the Gun Fight at the OK Carrol. Tombstone was a mining town and as such was a violent place. Fights over claims, Indian attacks, robberies, and shooting were frequent. Our first stop was the Boothill Cemetery. Used as the town cemetery from 1878 to 1884 Boothill was the burial place for many of the local violent deaths. In the early 1900s, some locals attempted to identify the graves and cause of death for the internees. Most of those identified died from shootings, beatings, hanging, (legal and illegal), killed by Indians, crushed by their horse, poison, blown up in a mine explosion, and burned to death in a fire. A few did die of diseases or unknown causes. It was not a healthy place to live. Continuing into town, we walked Main St visiting the local stores (mostly souvenirs) and chatted with a few of the cowboys and dancehall girls drumming up business. Of course, we couldn’t miss the shootings at the OK Corral enactment. If you don’t know the story, it involved the three Earp brothers, Virgil, the town sheriff, Morgan and Wyatt, and Doc Holliday against cowboys Frank and Tim McLaury, and brothers Ike and Billy Clanton. In 30 seconds, 30 shots were fired, and 3 cowboys were dead. It was a good show, and the ticket included Tombstone’s Historama (kind of hokey), a cowboy bunkhouse, a prostitutes crib, the old office, the boarding house, and a photo studio. Good fun. 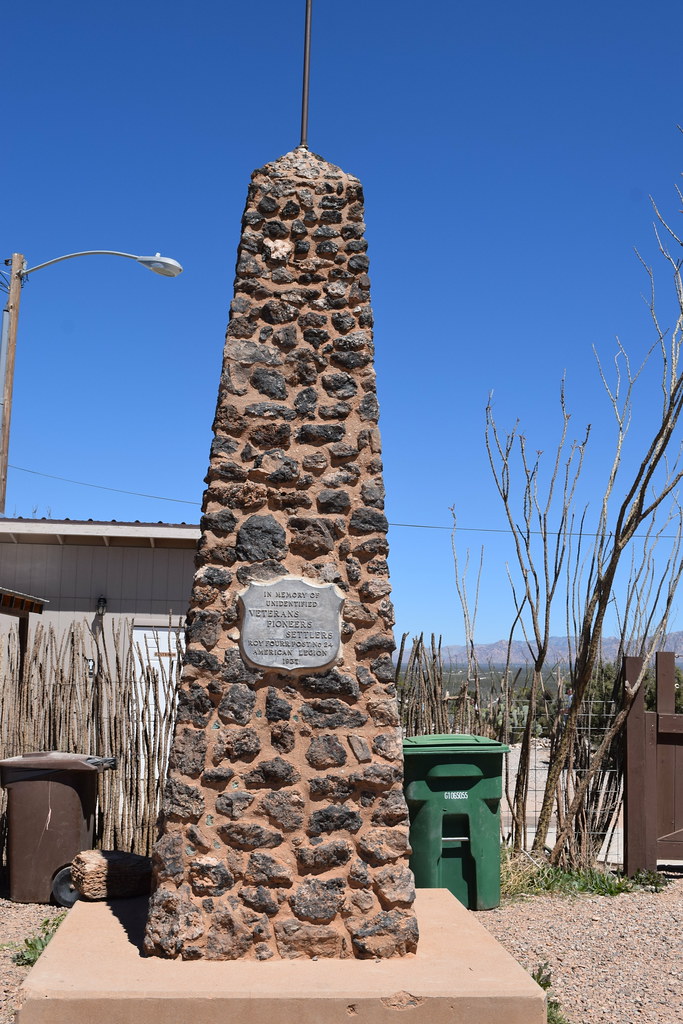 We really enjoyed that day.
On our last day, we found the Western part of the Saguaro National Park. The drive through the park was highlighted by many blooming cactus we had not seen before. The saguaro with their arms up looked like soldiers marching up the hills of the park. 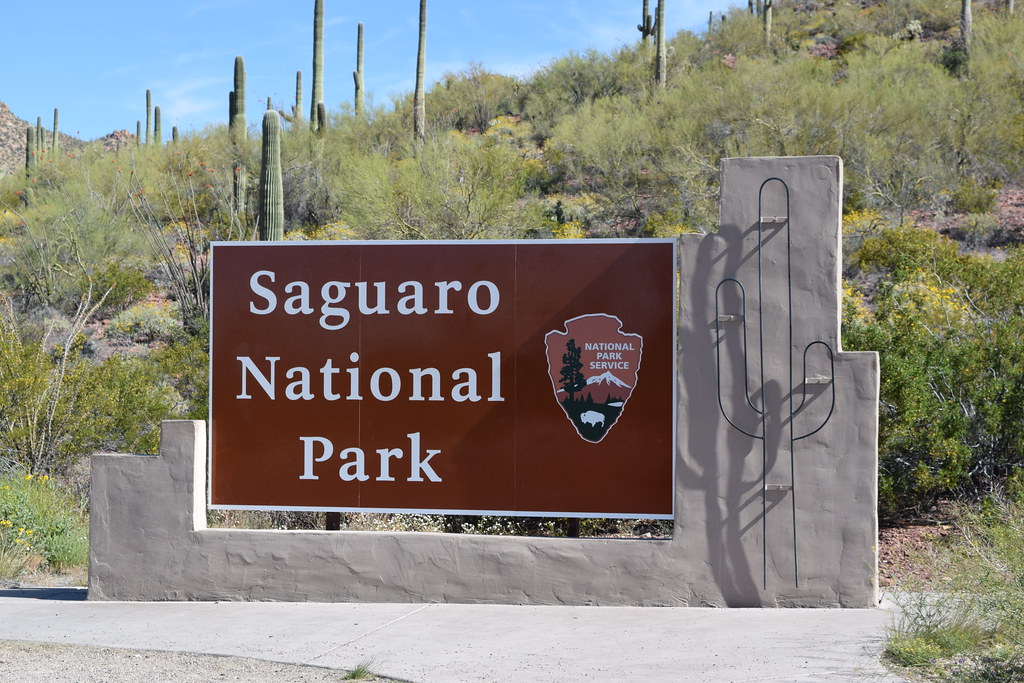 More information about the Saguaro Cactus: https://www.nps.gov/sagu/planyourvisit/upload/The%20Saguaro%20Cactus.pdf
We left Tucson, going east to Las Cruces, NM. Here we were staying at the Coachlight Motel and RV Park. " Recommended" by our friend Leigh as a place close to the highway, suitable for a night but don’t give them your credit card. (we didn’t) The park was OK and only $22.00 at night with Passport America. It was also close enough to White Sands National Monument. Of course, White Sands was closed the next morning for missile testing (it is near the White Sands Missile Range and Alamogordo, NM. https://www.wsmr.army.mil/Pages/home.aspx http://www.atomicheritage.org/history/trinity-test-1945 We had to wait until after the tests at 11:30 to visit.
White Sands is spectacular. The White sand dunes, made of gypsum, provide a dramatic landscape. We travel the loop road through the dunes. The sand is soft, like talcum powder and walking in it is difficult, but there are trails winding through the dunes. Another highlight was watching people slide down the dunes on sleds. It looked like fun if I were 20 years younger. We had another fantastic visit to a National Monument and afternoon. 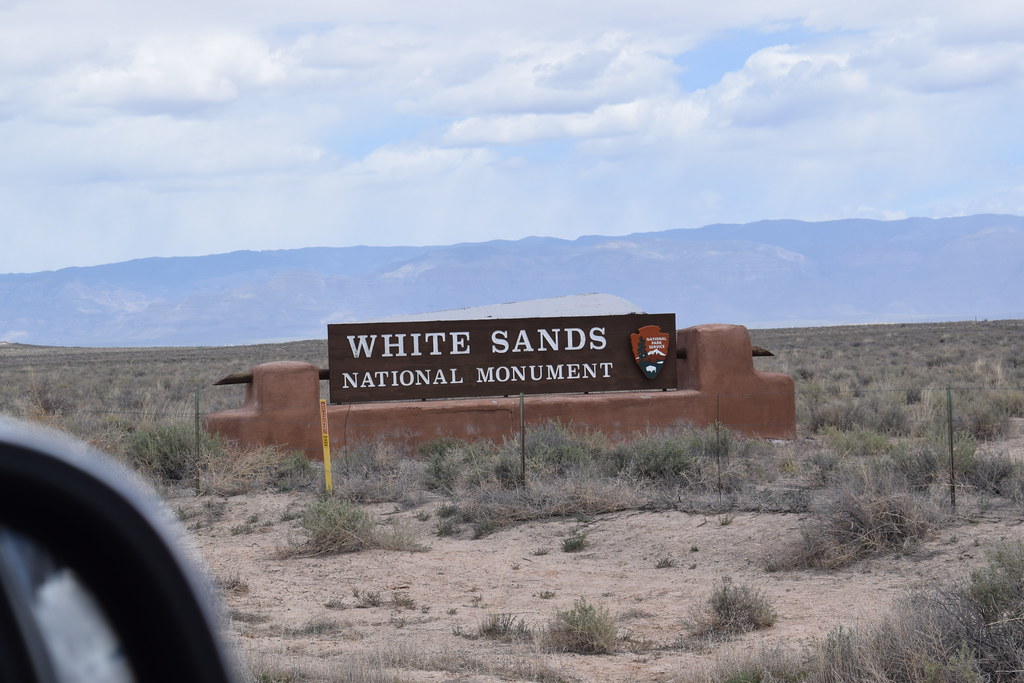 One more night at the Coachlight then we moved on to Fort Stockton, TX. We stayed there for two nights, the first was a terrible storm, rain, thunder, and hail. The second to make time because we could not get into the campground in Fredericksburg, TX.